Appereance:
Gulbrand is a  bulky, heavyset man. He wears a skull-shaped helmet during his entrance, along with a shirt of sewn together bones and a dark, wooden cane, also decorated with bones. Underneath the skull he wears dark black facepaint, following the helmet's outlines. Under his bony overshirt Gulbrand wears a dark, black-and-grey mottled wrestling outfit. His head is shaved bald.

Finishers:
Forbidden Alchemy (Modified Chokeslam)
Ghoulcaller Gulbrand grabs the opponent by the throat and waistline, lifting him up in the air.
Gulbrand suddenly kneels down on one knee, using his arms to maximise [opponent]'s downward momentum before planting the small of [opponent]'s back on his knee, performing Forbidden Alchemy. 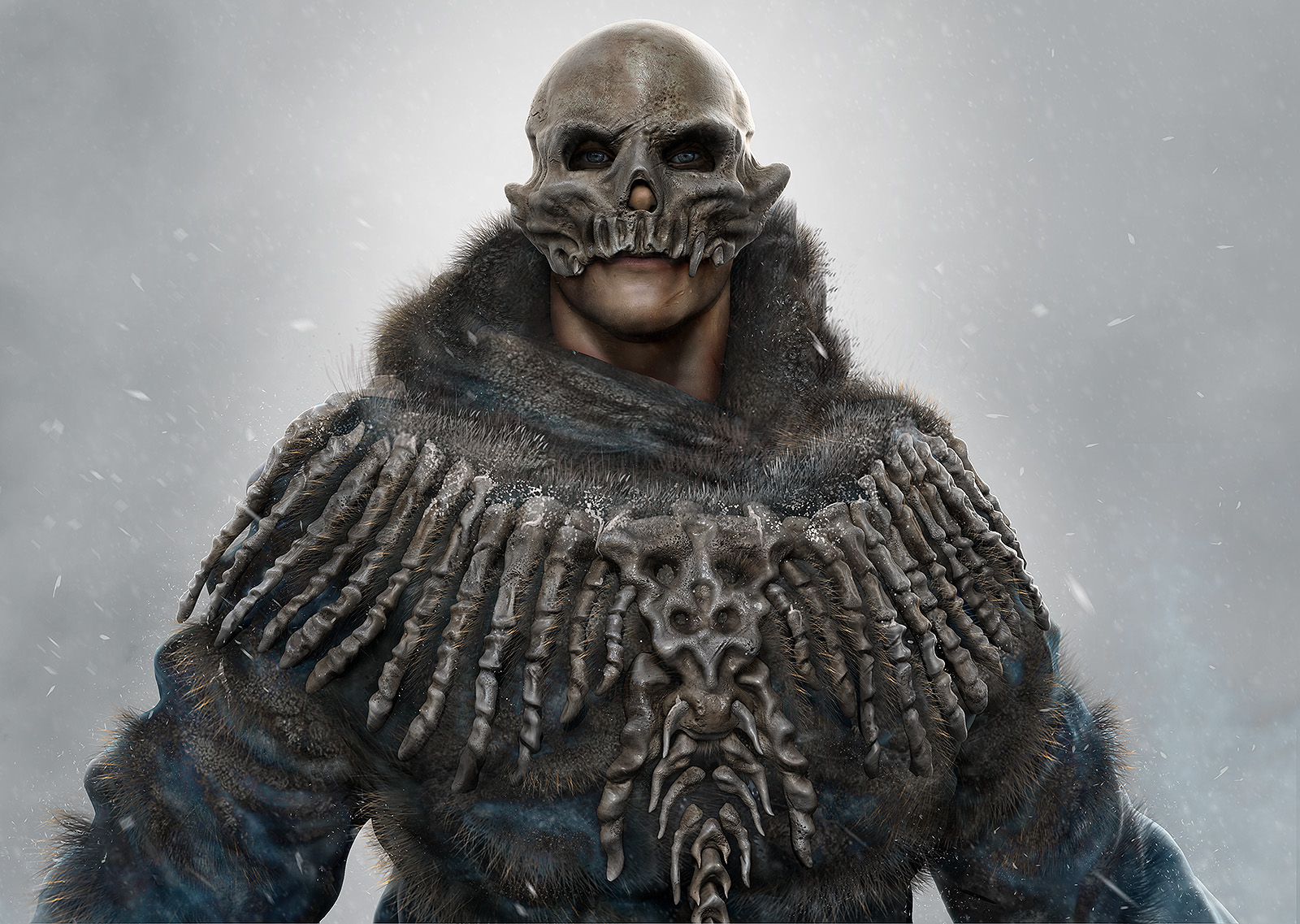 Entrance:
The lights dim until barely visible.
Low hanging smoke starts to fill the arena, as a burly man appears on the stage.
In his right hand he his holding a dark wood cane, decorated with bones dangling near the top.
On his head is a skull-shaped helm, and he is wearing a decorative overshirt made of sewn together bones, which rattle silently with each step he takes.
As Ghoulcaller Gulbrand reaches the center of the stage "Path" by The Bunny The Bear starts playing, as he slowly strides to the ring, his cane rhythmically tapping the ground as he slowly strides to the ring.
Upon entering via the ropes, Gulbrand removes his cane, overshirt and helmet, revealing a pitchblack facepaint covering his bald skull and the outline of his helmet. Ghoulcaller Gulbrand slowly raises his right hand, fingers stretched wide, palm to the air before clenching his fist, close to his heart in a fast and fluid motion as his music fades out.

Gulbrand is a mysterious figure, living in remote cabin in the Icelandic woods. Widely respected by locals, they always turn to him in their hour of need, as he is an adept practitioner of alternative and herbal medicine. A former athlete turned physician, Gulbrand decided to live a more quiet and reclusive life, after his wife committed suicide at a young age, due to severe bipolar disorder. Since modern medicine couldn't save her, Gulbrand started dabbling in alternative and herbal medicines, looking for ways to lift the heavy burdens of the mind and helping those with mental illnesses.

Over the years, Gulbrand lost himself in a rabbit hole of all kinds of herbal, spiritual and alternative healing practices. He molded himself as some kind of "Modern Day Shaman" and claims to be able to speak with nature itself, which he refers to as "The Ancients"

People are often sceptic towards Ghoulcaller Gulbrand's ethics and practices, but the locals all attest that Gulbrand has a gift for healthcare and especially mental healthcare, as nearly all of his cases have a positive result.

OOC: If possible, use the tag team entrance as often as possible. Gulbrand and Erisa are inseperable, unless it's needed for storyline reasons.