Not being Sullivans for a minute 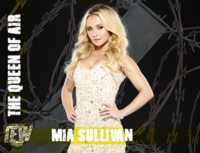 Not being Sullivans for a minute

Thing is the reason why I'm back in doing RPs in feds is I started the Sullivans almost a decade ago but I left without really.... having an end for them.

I always had that ... Crazy Mia side in her but never looked deep in it. I... barely scratched the surface when I explored it. So to me, I never really completed the story. I came back lately in TWG mostly because I wanted to see how the game was going but... I had that need.... that need to continue Mia's, Lea's and Ana's story.

So I started again... I started doing RPs... and I'll be honest, I realized quite quickly I was taking lot of space... I write a lot. I love to put details, I love to put emotions, I love to entwine details for later uses (if you read the PPV and followed the previous weeks, you'll understand what I mean)... Yes, there is wrestling, wrestlers, championships, etc... but I think it can be more too and the characters development is very important to me, yours and mine.

So, side note, I want to thank John... Because of details, I have been a lot on his back for forgotten ones but I have been a GM and I know how hard it can be and I gave him more trouble than he deserves

But he always backed me up and I believe he believes in me. He decided to award the Sullivans with titles and he believes I could keep all of them alive and worthy to be defended and to be able to put opponents over as much as I can.

Because yes.... Maybe some don't get it but I'm very easy to work with (most of the time) and I said many times to John that if he feels to take away belts from me, I'm totally fine with it. I just make sure the trio is a huge deal so when it is taken down, the victories against them is a huge deal and elevate people. So far, I have worked with some of you and I had a great time to do so.

However, my insecurity (because I'm not like Mia Sullivan at all on confidence side

) makes me think that I am possibly taking fun from you guys by... by writing too much? I'm not sure how to explain it lol. I just hope no one feels some unfairness or whatever and know that if I put so much efforts to these RPs, it's not because I am like "Ha! Writing more words will make me look cooler" or whatever. I just do it because... well, I love it... and because I love my characters to push my boundaries as a RPer. I'm kinda saying I'm just doing it for passion of writing and love for my characters.

So yeah, maybe my insecurity is not based on facts and just some ... feelings related to insecurity but I just wanted to make sure that no one was misjudging my intentions in any way. I take time to read all RPs, learning to know your characters from them, evaluating where you are going, etc. You put efforts in them and I believe it is important that people notice them

Talk to you soon

That's the spirit, can't put over someone deserving if you're not a big deal yourself!

"However, my insecurity (because I'm not like Mia Sullivan at all on confidence side Razz ) makes me think that I am possibly taking fun from you guys by... by writing too much?"

Not at all, write as much as you like, it's a creative hobby!

Just format your posts properly so that Deep has an easy time adding them to the shows!

Looks like you have a good attitude and have been given opportunities for it, bravo!

Yeah, I agree with carty here.
If people feel they are having spotlight taken from them... do more, you will get the screen time.

If everyone put as much thought and work into their character, let alone 3, it will only add to the show’s success.
And in the long run there success.